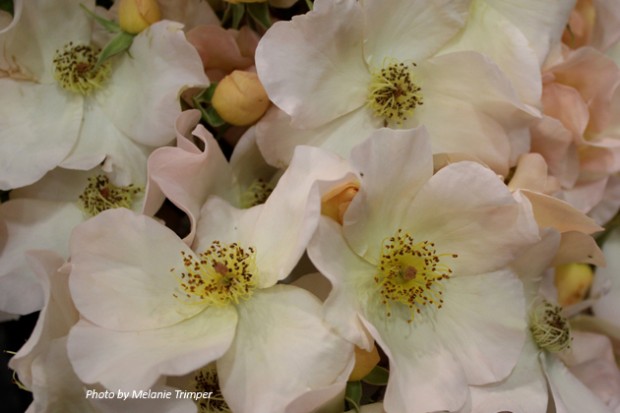 Sally Holmes is a famous Shrub Rose loved and admired around the world for its prolific flowering and excellent disease resistance.

It is interesting to note that this rose was bred by an amateur rose breeder, Robert Holmes, in the United Kingdom in 1976 and it was subsequently introduced by Fryer’s Nursery Ltd.

Sally Holmes produces  abundant attractive apricot pointed buds and beautiful, almost single, (4 – 8 petals) creamy white blooms with a coronet of bright yellow stamens and mild fragrance, borne in large clusters of 10 to 25 per stem.  It repeat flowers in flushes throughout the entire growing season after dead-heading.

Sally Holmes was born in Northern Ireland in the 1920s and married Robert Holmes in 1944. She died on 12 April 2012 and her memory will live on in the roses planted around the world and named in her honour.