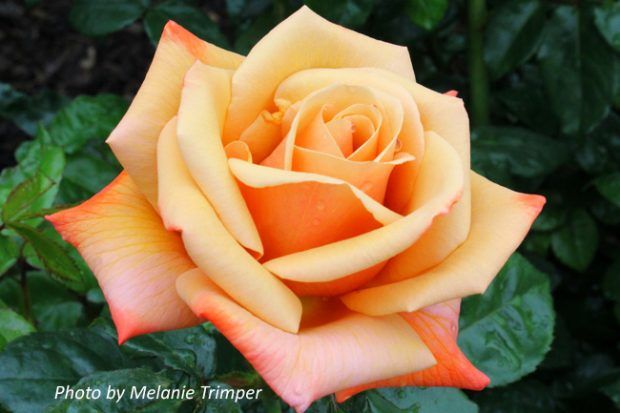 Bred by Alexander Cocker in Scotland and released worldwide in 1984.

Coppery orange with golden tones, this rose is an outstanding and novel colour in roses, but its popularity is because of the name ‘Remember Me’. It has become one of the special roses to plant in remembrance gardens or as a personal memorial to loved ones.

The blooms are of a classic Hybrid Tea form with flowers produced on single, long stems or small clusters on long stems carried evenly over the bush producing a most decorative plant.

Parentage is ‘Alexander‘and ‘Silver Jubilee’, two well-known roses in past decades and used as breeding parents in many of Cocker’s roses.

Growth is strong and upright around 1.5 metres tall by 1 metre wide. An outstanding feature of this rose is its abundance of glossy rich green foliage which has a high resistance to disease. ‘Remember Me’ blooms can change from a light russet/brown and increase in colour to deeper tones in the sun. The blooms have a lovely fragrance.

This rose was an award winner in the United Kingdom and Europe when first released. It was not released in Australia until many years later when it was introduced by Brundrett’s Roses in 1990.

South Australia’s George Thomson was an apprentice in Cocker’s Rose Nursery prior to coming to Australia and remembers Alex Cocker’s creation of this rose being part of his breeding group.

This popular rose is widely available from most major garden centres and all specialty rose nurseries including Ross Roses, Wagner’s Rose Nursery and Knight’s Roses, all proudly South Australian.