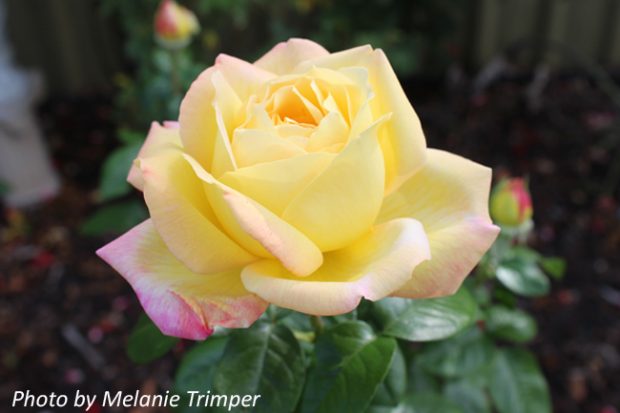 ‘Peace’ is a superstar in the rose world. It was also known as ‘Madame A. Meilland’ and considered the most popular selling rose of the 20th century.  By 1992, over one hundred million plants of ‘Peace’ had been sold. In 1976, it was voted the World’s Favourite Rose and the first inductee into the World Federation of Rose Societies’ Rose Hall of Fame.

Francis Meilland (1912 – 1958) is especially remembered for his legendary rose ‘Peace’ which was bred in 1935. Just before Germany’s invasion of France, Francis sent cuttings of the new cultivar to rose growers in Europe and to their agent Conard-Pyle in the USA.  Francis named the rose, ‘Madame Antoine Meilland,’ after his late mother, Claudia. In the USA, the new rose was released in 1945, the same day that Germany surrendered. The rose was named, ‘Peace’, in the USA, to mark the end of the war. It was an immediate success worldwide.

As Meilland sent out his cuttings just before the war, communication between the rose introducers was not possible, which is why the rose received different names. Other names are Gioia (Italian for “joy”), in Germany Gloria Dei (Latin for “Glory of God”) and in the USA, Scandinavia and Australia it was named ‘Peace’.

Peace has large light-yellow flowers, enhanced with pink edges. The colour combinations depend on the location, weather and fading as the flower ages. The durable flowers are very full, with 40 – 43 petals and have a sweet fruity fragrance. It flowers continuously throughout the season, is hardy and relatively resistant to disease and grows 1.2m tall and 1.25m wide. This variety is used as a garden rose, as a standard rose or in containers.