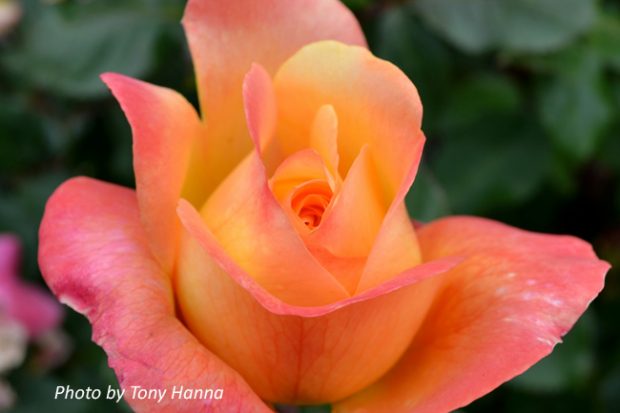 ‘Dame Elisabeth Murdoch’ is a Hybrid Tea bred by W. Kordes & Sons in Germany in 1999 and introduced into the USA in 2008 as ‘Speelwark’ which is its registered name. This rose was introduced into Australia by Treloar Roses in 2001 and named to honour Dame Elisabeth Murdoch (1909-2012), who became a much loved public figure who died aged 103. In particular, she was widely respected for her philanthropy and charity work, including support of music. Known for her love of roses, she was one of the very early members of the Heritage Rose movement in Australia.
This rose is highly recommended by many rose growers throughout the world due to its very healthy and vigorous growth. The flowers are medium to large in size with good form and feature a magnificent blend of colours ranging from peach yellow flushed with vermillion and various shades of pink, dependent upon the weather.
The large round blooms have 26 to 40 petals with an average diameter of 12 cm and the rose repeat blooms throughout the season. The height ranges from 0.9m to 1.15m with an average width of approximately 1m. The beautiful flowers have a strong fragrance and large pointed buds which open into exceptional full blooms. Popular with exhibitors, this rose is often displayed in Rose Shows and makes a great display in vases lasting up to 10 days.
Awarded Certificate of Merit in both the National Rose Trial Garden of Australia and Belfast Rose Trials in 2001.