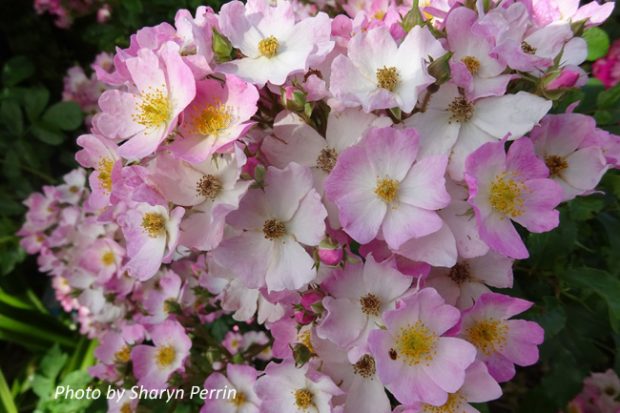 Ballerina was introduced by Mr. J. A. Bentall in the UK in 1937. The rose parentage is unknown.

Although Ballerina is officially classified as a Hybrid Musk, it is like an overgrown Polyantha producing big clusters of little single pale pink flowers with white centres around the stamens.

Ballerina has no scent to speak of but its other attributes make it hard to fault. After the massive first flush of blooms, it has a further flowering in late summer and autumn.

An enthusiast’s rose, Ballerina has a rounded growth habit with mid green foliage and grows up to 1.5m tall and 1.5m wide. This rose is very healthy, disease resistant and very easy to grow in a wide variety of climates. It can be planted and grown as a shrub or it will make a splendid hedge and does not mind being pruned to reduce the height.

Ballerina was awarded the Royal Horticultural Society “Award of Garden Merit” in 1993.